A downloadable game for Windows, macOS, and Linux

This is a short demo featuring the entirety of level 1!

Doggo Quest will be a full length RPG, with a completion goal in 2022! Watch this space for updates.

You can follow the game on its official old fashioned BLOG https://doggoquest.tumblr.com/ !

Short and sweet! Very chill game, overflowing with charm & humor - a worthy homage to Undertale if there ever was one. I actually laughed out loud at bits of this, and I hardly ever do that...

(played v14 on Windows - I'll definitely be watching for updates!)

i love this, this is amazing

Thanks to everyone who has played the demo so far!!! I'm filled with MEGA GOOD ENERGY from all these comments, and I'm plugging away as fast I can at finishing this thing ^_^

Loved the game! Played it on my stream and thought making a video on it would be nice. Liked everything, from the music and art to the characters and all. Can't wait to see the 2022 release!

i love this game everything is cute and the boss battle is fun i cant wait for the full game coming out in 2022 i hope the creator is still gonna be alive and healthy by then i even created my account for this game :D

I ABSOLUTELY ADORE THIS GAME!! I can’t wait for the full version!!

I just finished the demo and it was great

THIS WAS ADORABLE HAHA, love it, finished the demo. Cute dialogue, made me laugh. I love the looser style of watercolor drawing and ink work, especially love the interior of the skelebones house it's so comfy. Best of luck for everything!

Awesome demo, the only problem is that is too short! Loved playing as a dog, the boss battle was extremely fun (But scary because Doggos must be safe at all times) and the little details all over the game are lovely, can't wait for the full version.

The game doesn't work for me, it keeps crashing. Is it because of the godbot thing or something?

And when it does open it's just a black screen.

Hmm... What type and version of OS are you running it on? And which executable did you download?

Hi meebob
Only with this demo, I alredy liked too much of the characters and i'm curious about this world. The "Battle System?" is creative too. Thanks for your game <3

Hello Meebob! Your game is awesome, i'm so excited for the launch! I made a review of your Demo, but in Portuguese, because I'm Brazilian lol

Anyway, Good Luck in your game!

Just played your demo, I hope you don't mind me providing my feedback - I think feedback is a really important part of the game development process.

MINOR SPOILERS on this last two for those that haven't played yet...

4. I (rightly or wrongly) expected a 'fetch failed' when hitting something during a fetch sequence and the number of 'lives' to persist over multiple fetches. Nothing necessarily wrong with your implementation but it felt a little easy as a result. That said, it is the first encounter of the game and it is reasonable that they would get more difficult as you create additional levels.

5. On similar lines, I 'solved' the box puzzles by using the dash ability given immediately before said puzzle. I think the game expects me to push the boxes around first based on the dialogue provided. If you have just given me an ability then I am likely to just use this immediately - which I don't think is how you currently expect this to play out.

I hope the detailed feedback is useful, I am developing my own game so totally hope you take this in the manner it is intended - to help you make the best game possible!

Thanks for the detailed feedback! This is super helpful.
Thanks for the kind words! And, yeah! I agree with most of what you pointed out with what needs improvement... I think I may actually go switch up the sequencing on the puzzle rooms now.  Thanks again for the crit!

A pleasure. best of luck!

havent played yet, but checked the soundtrack....and what kind of chiptune is that? honestly, its pretty cool!

This was such a lovely little experience. Cute, simple,  & enough magic to keep you wanting more!

Reply
Carstati10 days ago(+1)
Loved the game! I think my game had a glitch of some sort and I was unable to progress past the river section (I watched another video on the game after recording this one and noticed they made it further). Really love the game though! :)
Reply
meebob10 days ago(+1)

I am so excited for the next update! When it will come?

I came for the Doggo and I left with a smile 🥰

it's a demo! they'll add more stuff in the future

That was the point of their comment... A recommendation for them to put in the full game...

I love the game and the visuals are amazing!!

I need this game. The art, the characters, the vibe is Splendid! I would die for Doggo

I really like this game, and definitely would buy the full version.

Omg I love this game.

The art style is great, the music and all the game!

this game is great, its got a great art style and good dialogue and characters! (lmao the swimming dog sprite is the best)

Could you add to your feature list "being a good boy"?

Absolutely loved the game cant wait to see the full version! would love to recover the game once its further along! ^_^

Question, would we be able to, y'know, since it is inspired from undertale, The mercy/Not Mercy mechanic will be there?

Is this game going to be a choice based game and is this REALLY similar, some elements, or not much like Undertale?

There are going to be choices, yes, but not the same kind of choices at all as in Undertale!

I'm taking things I like from Undertale, like the character-driven encounters, the overall structure and pacing, a whimsical and mismatched aesthetic, occasional creepiness, and DOGS, but using a totally different art style and a completely different story.

That sounds great! Also for a villain there should be a creature that's half cat half dog!

Will this game be as deep and thought provoking as Undertale was?

It is going to be approximately 1.8 meters deep

that's the best possible answer to a question like this XD

this game seems so wholesome uwu. i'm such a fan of undertale. is there a chance that i could stream it on twitch? i think it's so cool that more people should see it. thank u and keep up doing stuff like this <3 pd: i'm from argentina :o

Hello! Will it be on Steam?

Maybe someday!! I'll starting thinking about that more seriously once I'm closer to the end! I'd say the game's only about ~10% complete right now.

this is so cute! i miss my undertale phase so much and all the little undertale references made my heart warm. i cant wait to see the full game!

The watercolor art is very good. I look forward to completion

I like how the fish call the doggo "POOPY" XD

Its super funny, at least for a child. 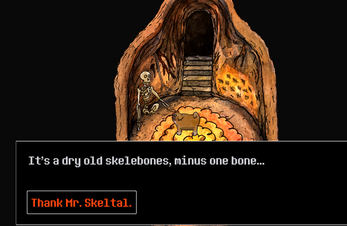 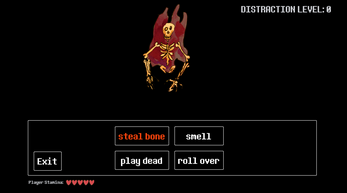 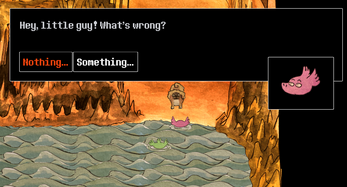